Crocheting is still very new to me.  I only learned about 5 months ago or so.  But I wanted to make blankets for Project Linus.  Its a non-profit that distributes blankets to kids, here’s a link if you want to lean more…..http://projectlinus.org/index.html

But as you know if you crochet, it takes a long time to do a blanket.  I made one for my daughter and am working on one for my hubby but I wanted to find something that has a faster turn around.  So I thought i would try to crochet on fleece.  So my options are to do a blanket stitch around the blanket or crochet on the blanket.  I like the look of the yarn going around the blanket instead of embroidery floss, so it then became how do I make the holes in the fleece.  Everyone told me about a rotary cutter with a blade called the skip stitch.  Ya, well, cant find it!  The company that had been making them has since stopped, not sure what happened.  There are a few others that I saw on the web but they had mixed reviews.  I went to the local fabric store talked with the lady there, she was ordering a new one and it was supposed to be in next week.  Next week came and went and still no rotary cutter.  I was tired of waiting so I decided to try something else.  The first thing I tried was cutting the fabric with super sharp scissors.  That is the blue blanket in the pictures.  You can see that some of the holes came out a little big.  didnt really like it.  Plus my hand was super tired.  I tried a few other things to poke the hole, nothing really worked good.  Then I thought I would try a seam ripper.  Totally worked!  I was so happy!  So thats how I did the green blanket and you can see that it worked really well, you dont see the holes.  So that is the way I will be making them! 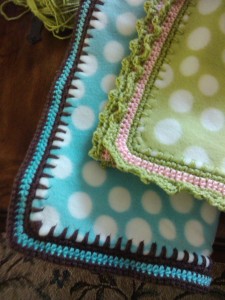 Im sure there are several different ways to do these but this is the way I did mine. 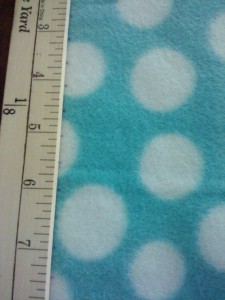 I bought a yard of fleece trimmed it up.  I cleaned up the edges they werent cut very clean, then cut about 8 inches or so off.  Then I used a disappearing ink marker and a yard stick and marked every half inch. 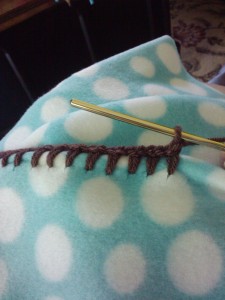 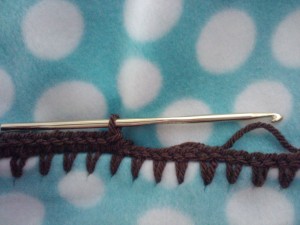 Next row is single crochet. 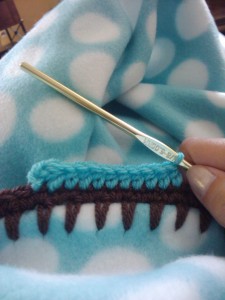 then half double crochet. Then single crochet to finish it.   With the green I did the same but I also added a little ruffle on so it looked girly.  For that I did half double crochet, double crochet, half double crochet, then chain 4 skip 3.  Does that make sense????  haha  Ok, well if you REALLY want to know let me know and I will do a step by step.  These 2 are all ready to be donated now I need to go get more fabric and yarn and start another.  I think I may try to do a receiving blanket.  From what I have seen online doesnt look like you have to really make a hole if you use a small enough hook you can work it in between the threads……anyone try it before?